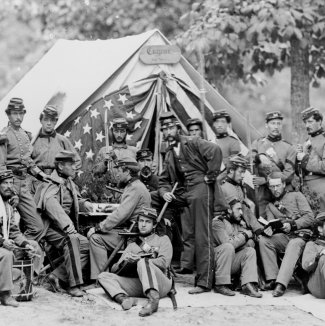 The War Between the States was the first large and prolonged conflict recorded by photography. During the war, dozens of photographers, both as private individuals and as employees of the Confederate and Union Governments, photographed civilians and civilian activities; military personnel, equipment, and activities; and the locations and aftermaths of battles. Because wet-plate collodion negatives required from 5 to 20 seconds exposure, there are no action photographs of the war.

The name Mathew B. Brady is almost a synonym for Civil War photography. Although Brady himself actually may have taken only a few photographs of the war, he employed many of the other well-known photographers before and during the war. Alexander Gardner and James F. Gibson at different times managed Brady's Washington studio. Timothy O'Sullivan, James Gardner, and Egbert Guy Fox were also employed by Brady during the conflict.

Photographs included in this leaflet have been listed under one of four main headings: activities, places, portraits, and Lincoln's assassination. Items in the first two parts are arranged under subheadings by date, with undated items at the end of each subheading. Photographs of artworks have also been included in the list. Any item not identified as an artwork is a photograph. Names of photographers or artists and dates of items have been given when available, and an index to photographers follows the list.

At the end of this leaflet, there are instructions for ordering photographs. Many photographs of the Civil War held by the National Archives are not listed in this leaflet. Separate inquiries about other Civil War photography should be as specific as possible listing names, places, events, and other details.

Sandra Nickles and Joe D. Thomas did the research, selection, and arrangement for this list and wrote these introductory remarks.

15. Allan Pinkerton, chief of McClellan's secret service, with his men near Cumberland Landing, Va., May 14, 1862. (Pinkerton is smoking a pipe.) Photographed by George N. Barnard and James F. Gibson. 90-CM-385.

21. President Lincoln visiting the battlefield at Antietam, Md., October 3, 1862. General McClellan and 15 members of his staff are in the group. Photographed by Alexander Gardner. 165-SB-23.

Generals in the Field

39. "Volunteer Refreshment Saloon, Supported Gratuitously by the Citizens of Philadelphia, Pennsylvania." The picture includes a view of the outside and three small views of the inside. Lithograph by W. Boell, 1861. 15-M-40. (civil_war_039.jpg)

41. Members of the Christian Commission at their field headquarters near Germantown, Md., September 1863. Photographed by James Gardner. 165-SB-53. (civil_war_041.jpg)

55. A Union station on the James River established for extracting gunpowder from Confederate torpedoes, 1864. Photographed by Egbert Guy Fox. 111-B-434.

Photographers and Their Equipment

78. Men of the Quartermaster's Department building transport steamers on the Tennessee River at Chattanooga, 1864. 165-C-1068.

79. Excavating for a "Y" at Devereux Station on the orange and Alexandria Railroad. Brig. Gen. Hermann Haupt, Chief of Construction and Transportation, U.S. Military Railroads, is standing on the bank supervising the work. The "General Haupt," the engine pulling the train in the photograph, was named in Haupt's honor. Photographed by Capt. Andrew J. Russell. 111-B-4877.

80. Station at Hanover Junction, Pa., showing an engine and cars. In November 1863 Lincoln had to change trains at this point to dedicate the Gettysburg Battlefield. 111-B- 83.

96. Confederate dead behind the stone wall of Marye's Heights, Fredericksburg, Va., killed during the Battle of Chancellorsville, May 1863. Photographed by Capt. Andrew J. Russell. 111-B-514.

118. Silhouette of ruins of Haxall's mills, 1865, showing some of the destruction caused by a Confederate attempt to burn Richmond. 111-B-137.

127. General view of the city from the south toward the Treasury Building and the White House. Cows are grazing near Tiber Creek. 111-B-5147.

134. Brumidi, Constantino, artist who painted murals and frescoes in the Capitol; three-quarter-length, standing, holding brush and palette. 111-B-3791.

151. Davis, Jefferson, President; three-quarter-length, standing. Photographed by Mathew B. Brady before the war. 111-B-4146.